Ghanaian actor Van Vicker and actress Selly Galley reportedly got into a heated debate while shooting a Television show. The incident took place in the studios of Nikki Samonas’s new show, Time with Celebrity.

According to sources present at the location of the shoot, both celebrities turned up to compete against each other in fun games; but things got heated when Van Vicker won the games and Selly alleged that he had cheated.

What begun as a friendly argument quickly erupted into a heated debate, which almost turned violent. The actress reportedly walked out in the middle of the show threatening not to do the rest of the show; and had to be persuaded by Nikki Samonas to return.

Anyone who is familiar with Selly’s escapades in Big Brother Africa in 2013 should be well aware that the actress can be quite competitive and fierce.

The two however seem to have reconciled after the show. A video posted to Instagram shows them both in the parking lot laughing about the whole incident, with Selly shouting “Let the bloggers know that Van Vicker is a cheat”.

Some lose in grand style, others??? Hmm we can’t tell 🤣😂🤣😂 Catch @iam_vanvicker as he battles @sellygalley on TWC this Saturday for another thrilling episode at 4:00pm on TV3

Van Vicker went on Twitter afterwards to confirm that he had won all the games; but described Selly as “Beautiful, charming and vivacious”. He added “however I was a ball of fire during the games”.

He also acknowledged the fight that broke out, saying “The drama behind the scenes was a whole season on its own”.

See the Tweets below: 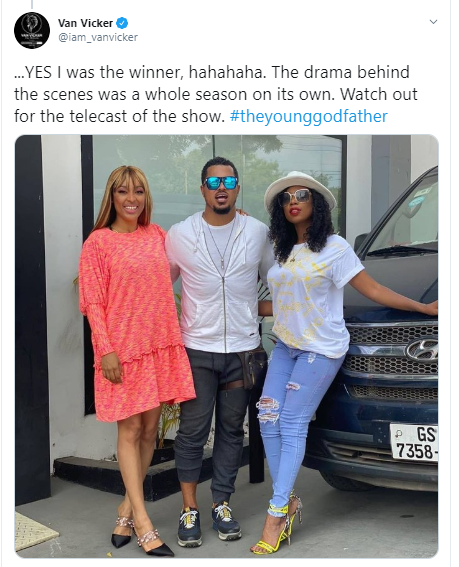